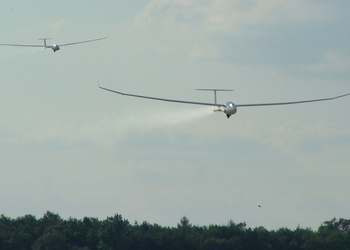 Today's weather made ​​it possible to play the assign area task in time 3:45 h. Starts began at 12:00 and after an hour and seven minutes was the last towing of 20m-class player. All competitors completed the task today serving newcomers to Michalków supporters beautiful landings.

According to unofficial results in the standard class again won Sebastian Kawa strengthening its leading position in general, the next were also Poles: Pawel Wojciechowski, and the third Lukasz Wojcik. The Czechs won the club class, Roman Mráček was the first and the second Petr Svoboda, third place was the representative of Argentina's Jose Javier Gaude.